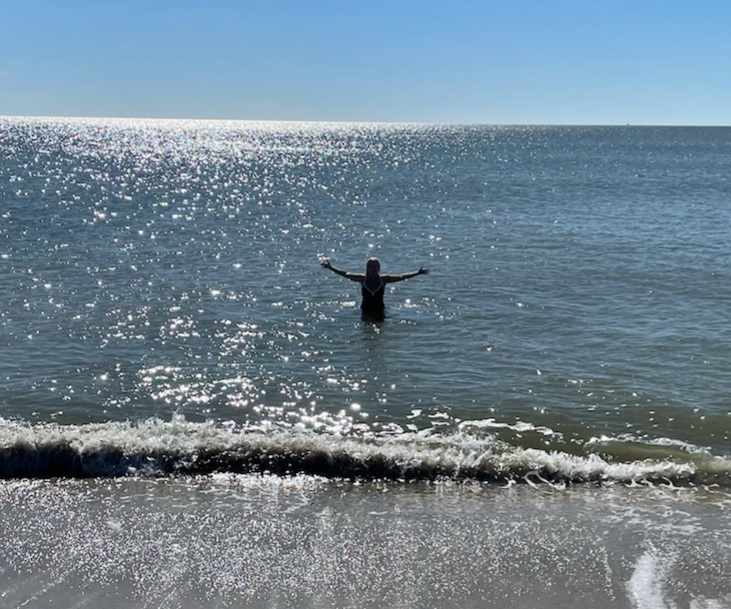 I’m writing this from Oak Island, NC, where I’ve been visiting family all week. It’s been super relaxing and nourishing, as the beach itself is nearly deserted and the weather here in Carolina is still warm–60’s and 70’s. A perfect pause from Covid, work, and other commitments.

Although it’s been over a month since it happened, I wanted to share my first “real” traumatic wildlife encounter with you. On a cool 1st of October, around 7:45 AM, Molly discovered that she is not the only animal at Avalon. Walking along the perimeter trail, Molly got one sniff too close to Mr. Porcupine.

I say “traumatic” to modify ‘wildlife encounters’ because Michael and I have experienced plenty of wildlife: flocks of wild turkey, deer, howling coyotes through the pines. I even saw a very large snow hare last winter, which I understand is rare to see. We watched bats fly out of the cupola all summer, cedar waxwings dive-bomb mosquitos over the frog pond, and an unusual antic with a bold raccoon who nosed her way into the hayloft (now my office) and, well, left her mark. We’ve seen a fisher and porcupine hanging out in the apple trees (literally) and of course tons of raptors, eagles and other birds.

But when I heard a ‘yelp’ and looked down at my feet to see a cowering, shaking Molly, I went into EMT mode. We were probably half a mile from the house and I fast-walked her back, my heart pounding and tiny sweat beads forming across my forehead.

I’d say she probably had thirty quills in her left shoulder and leg and twice that in her back left leg, foot, and tail. The sounds of that walk–the longest in my life–were of her doggie hassle, the crunch of fall leaves underfoot and the repeated phrase, “It’s alright baby girl. Mama’s got ya,” coming from my lips in a low but assertive murmur, over and over. Molly seemed to be crawling, not walking. She hovered extremely close to the ground but moved in step with my speed-walking. It was as if she knew she couldn’t fix the problem herself, slightly ashamed at how vulnerable and exposed her little dog-body was.

At the house, sweat now pouring off of me, I ripped off my coat and hat and dialed the number to Michael’s work, WIndham Highschool. It was unclear whether he could leave school or not; in my frustration, I threw the phone across the kitchen. That didn’t help things so I picked it up and called a neighborhood friend who is also a dog owner and asked where the closest emergency vet was. I called the place she suggested only to be told they weren’t yet open. But they did refer me to the Maine Veterinary Medical Center in Scarboro. We hopped in the car and were off.

If the walk from the incident back to the house was the longest walk of my life, the drive to that emergency vet was the longest drive of my life. Molly’s black snout was glued to the door frame in the back seat where she half-sat and half-lay, her general position while riding in a car (I think she gets car-sick). I kept cooing and shushing, telling her ‘it’ was going to be alright. In reality, I was conjuring up the worst scenario in my head after remembering that a dog I used to house-sit for swallowed a quill after his full-facial encounter with a porcupine. Some quills had sprayed his chest, and a quill had “migrated” into his lung, collapsing it three weeks later. He died in his sleep.

In between comforting words to Molly, I prayed. To Artemis, the Goddess of Wild Animals and the Hunt. I prayed to Mother Mary and Jesus, and to my own guides. I needed my baby girl to be okay and I needed to stay grounded; the razor-sharp focus I was experiencing was super-enjoyable, but we were still in EMT mode.

I arrived at the emergency clinic to thankfully see Michael waiting for us in the parking lot. We sat on the pavement, a bright, beautiful fall day overhead, Molly between us; we didn’t say a whole lot. The tech came out to get her, and Molly was going in for “Porcupine quill removal.” They did indicate that they would give her some sedation; we signed off on the consent forms and then we waited.

Two hours (and $945) later, Molly was quill-free and very, very woozy. I had the vet tech help me lift her into the car–not because Molly is heavy but at that moment, she was dead weight. I babied her for several hours as she recovered, saying prayers of gratitude now.

Then, I had to pack: I was going to an island retreat off the coast of Acadia to do dream work with a beloved mentor and two other women. I did a load of laundry, washed some dishes, checked over the must-have list from the retreat’s organizer, finished up some lesson plans so I could truly be “unplugged” for the next 72 hours.

About three o’clock, I realized I hadn’t eaten–not since the apple & cinnamon donut from the Holy Donut around 9:45 AM. Was I even hungry?

And then it dawned on me: “Must be the adrenaline.” Adrenaline is that yummy stress hormone which is released into your bloodstream by the adrenal glands in times of panic, trauma, fear. There’s tons of benefits one feels from an adrenaline boost, including dopamine, better vision, easier breathing and an analgesic effect against pain. The buzz must have wiped out my need to eat as well. My heightened euphoric state was so noticeable I asked Michael if we could please look into purchasing some mountain bikes, remembering the rush of flying over streams and rugged terrain in Durango on my trusted Diamond Back. Speaking of Michael, I was in a near honeymoon state over him and his willingness to share the burden of a pet emergency, my soaring phone a crumpled memory. And everytime I looked at Molly, especially once she started to re-orient, shivering herself into a post-surgery state of mind, I was overcome with emotions–love, gratitude, relief. Were these heightened emotions for partner and pooch part of adrenaline’s lottery ticket? Bring it!

As I watched my rapid Covid test turn no colors at all, indicating I was negative, I texted my dream mentor: “Negative! See you tom!” As I drove north, in the most beautiful state in the most beautiful season, I thought about how Covid has induced the opposite of what I had been the recipient of the day before. The “threat to safety” which forced the adrenaline to bloom was like lightning in my blood; to be sure, adrenaline has been our ticket to longevity. If you’re reading this right now, it’s because some of your ancestors way, way, way back were darn good at assessing danger, were likely familiar with sacrifice and surely knew about the rewards of risk-taking in general.

But Covid moved us inside and we started to modulate to isolation. We reached way down to our tribal chakras and have been in a constant state of evaluation: Who’s safe? Is [fill in said activity] worth the risk? We drew in, making ourselves small, and swooned from all of the different (and sometimes contradictory) signals from the news, doctors & specialists, family members, friends & neighbors, spouses, all the while wondering What Should We Do to Be Safe? Should I go out, ever again? Is that shot going to work, or am I going to get sick anyway?

I wonder if we could practice more “tribal instinct” that leans toward group prosperity and the survival of the collective as a whole, like our ancestors generated, instead of the seemingly never-ending drip of evaluation, judgement and discrimination of who and what is “safe”? The vigilance of Being The Decider syndrome–which we all were forced to inherit–produced a whole bunch of collective anxiety! What some of us would do for just a Day Of Adrenaline, where what YOU DECIDE is Instinctual, primal, and voracious because it lets you know you are alive.

We’ve become engrained to a persistent separation that none of us asked for. But there comes a time when one must ask themselves: What will the cost of my long-term orienting to fear be? Can I peel some of the warning labels off of my world? If you want to explore and hopefully institute a new mindset that will hold your post-Covid self, one that allows for your safety (perceived or otherwise) and your drive to get on with the hard work of living, you’re going to need a bigger boat. I realize we may not be “post” anything. Does that scare you? If it does, will you permit the fear to be WITNESSED instead of WOVEN into the fabric of your reality?